The MASON TOWNSHIP HALL, located on the corner of Kessington Road and US 12, was built in 1874-75. The Victorian-style schoolhouse building of yellow and red brick had an original cost of $3,000. The mixture of yellow and red brick is unique of structures in the area and all the brick was made locally within a four to five-mile radius.

The two-room school accommodated up to 110 students and employed two full-time teachers. It was at one time known as the Sailor School and later as the Kessington School. It was used for classes until 1959 when it was purchased by the Constantine School District. The building has retained its original intent as a place of learning, having served as a public building throughout its 140-year history. It was purchased in 1964 by the Mason Township Board.

In February 1973, the Cass County Library established the Mason-Union Branch Library in the Township Hall. The library became a branch of the Cass District Library 1993.

The building and outhouse are listed on the Michigan Register and the National Register of Historic Places under its original name, DISTRICT NUMBER 5 SCHOOLHOUSE.*

In 1987, a building project restored the building’s interior to its original décor. In 1993, the Township Board established an office in the building. Partial funding came from the Myrtle Hatch Foundation.

The original bell that once was seated atop the District No. 5 Schoolhouse was brought back to Mason Township in 1996, by Bill Hoffman, a former student. The steel amalgam bell, cast in the 1870s by the Gould Mfg. Co. cost $40 according to the company’s catalog.

It is believed the bell was removed in the 1960s when the building was made into a Township Hall. It was thrown from the roof and damaged. The Supervisor housed it in his barn until another resident took ownership. It then traveled to Wichita, Kansas where it stayed until the owner offered to sell it back to the Township. Bill and Jean Hoffman went to Wichita to retrieve the bell. They came back with it, had it repaired and donated it to the Township. A structure donated by residents, houses the bell, preserving some of the Mason Township’s history for future generations.

The documentary film “From Moccasins to Main Street,” produced by a Sturgis, Michigan resident, takes viewers on a trip from Detroit to Chicago along the Sauk Trail (now called US 12) and includes a stop at the Mason Township Hall where the bell is rung.

The latest addition to the building was erected in 2001. The need for more space by both Mason Township and Cass District Library prompted the decision to move ahead with construction. The 28’ x 42’ addition, with full basement, cost $130,000 and was paid in full from funds on hand. The Township Board now uses the new addition allowing the Mason-Union Branch Library full use of the original section. The library contributes monies each year to defray utility and maintenance costs.

The park area around the Township Hall has playground equipment for children to enjoy, while their guardians can relax on one of the two benches donated in memory of Waldo G. Ehret, a 40-year Mason Township Trustee and Thomas R. Harman, Township Board member and Building Inspector for many years.

Mason Township was named after Steven T. Mason, the first Governor of the State of Michigan. The Township was established in 1834. Originally it was part of Ontwa Township and for a brief period was part of Porter Township, when it was split in 1933 from Ontwa and Penn Townships.

Early efforts were made to settle the community of Kessington. The first settler in the township is not known for sure, however, Elam Beardsley obtained the first recorded land grant in 1830. In 1831, two additional grants were recorded to C. Fanning and William Jordan. They were followed in 1832 by Darius Beardsley, Levi Grant, and Jacob Ross. In 1835 Lyman Stevens joined them. Moses McKessick recorded a plat for 19 lots in 1872 and a general store and blacksmith shop was located there at the time.

In 1892 a Post Office was opened but closed in 1904. During this period, the place was known as Sailor, possibly after postmaster, Benjamin Sailor.

One of the first efforts in the State to save an entity of historic significance involved the Burr Oak Tree located just east of the intersection of US 12 and Kessington Road. In the 1930’s when the highway department proposed plans to remove it, in a road-widening project, the Michigan Historical Society went to court to save the 58-inch “witness” and “council” tree, a symbol of the Indian inhabitants of Mason Township. Unfortunately, the tree came down in the 1980s when struck by lightning. 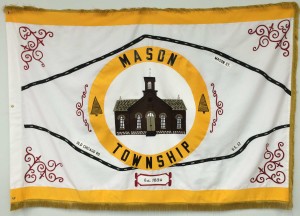 Mason Township boasts of having the only township flag in Cass County, MI. In 1998, officials asked residents for design ideas. The late Bob Brockus submitted his idea and Irene Thompson incorporated it into the layout. She arranged to have the flag made and personally fringed it in gold. An applique of the Township Hall set in a gold seal rests on a white background, bordered by the main roads in the Township, US 12 (Sauk Trail) and Mason Street. 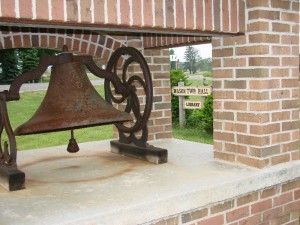 A special thank you to:

Bill and Jean Hoffman for purchasing the Bell and bringing it back to Mason Township. They are longtime residents of the Township, and Bill is a 1940 graduate of District No. 5 School.

More special thanks go to:

Melvin and Shirley Stewart and Family – for their generous monetary gift to have the structure completed. The Stewarts, at that time, owned and operated Best Plastics, Inc., the largest employer in the community. They are longtime residents of Mason Township.

Mike Hibshman – for repairing the Bell. Mike is the owner of Hibshman Screw Machine Products in Union, MI.

Larry Sharp – for all the concrete work and the roof construction. Larry is the owner of Larry Sharp Construction in Edwardsburg, MI.

Bill Johnson, Buck Jeru, and Tom Dull – for their labor to construct the structure. These men are area residents and contractors.

Mast Construction Company – for the drawings of the structure.

Barbara Harman, Judy Hughes, Arlene Chew, Patrick Featherston, Joe Gibbs, Linda Gibbs, and Pam Wiedenmannott (the previous Township Board) – for taking the initiative to see that a piece of history is returned.

The Herman Bishop Family – for their support in the initial pursuit to purchase the Bell. They are lifetime residents of Mason Township.

The COPS Committee – for their support in making the celebration a memorable event. Community Policing strives to bring safety to the community; they also partake in many other projects for the betterment of Mason Township and its beauty.

Those who brought pictures and stories to share in this historic moment.